I had a vision of how my breasts would look after having two daughters. Basically: larger than my pre-baby breasts. Not as perky, of course, but bigger.
My once-small boobs grew into actual breasts during both pregnancies, which I loved after years of wearing training bras and getting teased for being flat-chested. At long last, I was able to try on cute bras, in a size so common that I actually had several to choose from. Those are the breasts I’ve always wanted; those are the breasts I wanted to keep for the rest of my life.
ALL HAIL, PREGNANCY BOOBS!
The thing is, I had somewhat naively thought that I’d get to keep them, even after I stopped nursing. But I was in for a rude awakening: My old boobs returned once again after I weaned my second daughter — except this time, they were even smaller. In fact, I’m even tinier than I was in high school, which makes embracing my body after babies that much harder.
Read the full story on Babble
Posted by Unknown at 8:04 PM No comments:

Opinion: Are You Raising Your Daughter To Be Assertive? My daughter had said no. She’d said no twice, actually, but for some reason I seemed to be the only one who heard. Her words were clearly directed to the blonde-haired boy standing only an arm’s distance away.
How much clearer can she get? I thought as I headed from the bench toward the swings. The word “no” is not difficult to understand; there should only be one reaction – stop.
Instead he chose to try and hug her again.
Read the full story on Brain, Child
Posted by Unknown at 8:01 PM No comments:

Self-care is important and “me time” is a must — especially when you have kids. At least, that’s the message that seems to be playing like a broken record these days. (Just give a quick scroll through your Facebook feed, and you’re bound to stumble upon an article or two that mentions it.) But as a mom of two toddlers, carving out a window of time just for myself isn’t exactly at the top of my list. As a working parent, it’s hard enough finding time to set up a play date or squeeze in a date night (that actually happens) without just adding more stress to my already-hectic schedule.

Read the full story on Babble
Posted by Unknown at 7:59 PM No comments:

When your child's independence comes before you're ready 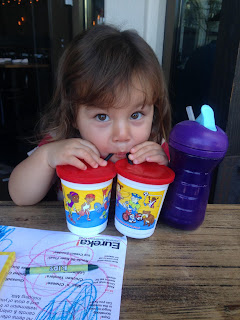 When did I become a spectator to my daughter’s life? Once upon a time, not too long ago, I was THE key player in her daily routine – I was her chef, her consultant on all things fashion, her driver, and moral compass.

“No, on my own,” she reminds me every time I bend down to help her pull on her sparkly Toms over stubby toes and pudgy feet. She thrusts her hands out in front of her, the universal sign for  STOP!
So I watch.
Read the full story on Parent Co.
Posted by Unknown at 5:25 PM No comments:

Random Aspects of my Life

Promote Your Page Too